Recently at a law enforcement conference, a crime analyst colleague was curious what technique would allow her to capture a Snapchat video as part of her investigations.  Snapchat is a photo / video sharing app which disappear after being viewed by the recipient.  It is very popular among the under-20 crowd that have been shying away from Facebook, Twitter and other apps / websites that the older generation have adopted.  However, sometimes an investigation of criminal and gang activities require the recording of Snaps within Snapchat for evidence collection purposes.  However most investigative work is usually done over a desktop computer and it has been difficult to connect the two.  Some investigators have setup rather clumsy setups similar to bootleg video recording with a smartphone recording the target phone with Snapchat.  Some have used free tools such as itools.cn in the past, but they don’t work on the latest iOS.  However, there is a much more professional setup possible if the investigator has a few bucks.  It requires 2 simple steps

iPhone has a built in broadcast capability called AirPlay which allows an iphone’s display to be shown on an Apple TV.  For those that don’t want to shell out for that type of hardware and are stuck in PC land, there is a tool called AirServer.  It is downloaded and installed on a PC with Windows 7, 8, 8.1 or 10, and is compatible with iOS 4 to 10.  The specific configuration tested in this scenario was on Windows 10 with iOS 10.  Here are the step

Step 1. Download and Install AirServer from https://www.airserver.com, and Enable AirPlay to activate it on your PC. 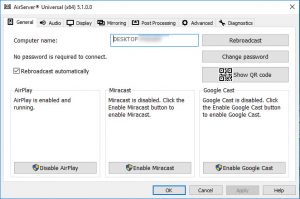 Step 3. On your iphone, swipe upward to get to the “Wireless” menu as shown below 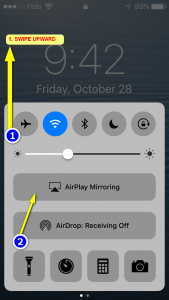 Step 4. Select the device you wish to broadcast AirPlay to.  The PC that you installed AirServer on should appear as below 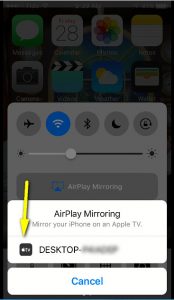 Step 5: The screen is being recorded.  CTRL+F10 will stop the recording and FastStone Capture will save in WMV format. 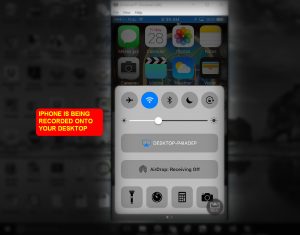 There may be many other alternatives, even free AirPlay broadcast tools.  However, I would be extremely cautious about any “free” tools that claim to be doing something useful.  As the Lifars Cybercrime folks advise me, “when you download free software on your phone, you’re not the customer, you’re the product”.  Think about that, you’re opening your machine up to surveillance.